So after starting around 4 ‘ideas’ to make with the mandala yarn I bought and then ripping them out, I finally settled on giving the secret paths shawl a shot instead of trying to do something with Tunisian crochet that I don’t really have a handle on yet.  This is also while finishing the caplet, starting a new (but easy) messy bun hat, and still working on the pom poms needed for my wreath idea.

I guess it just depends on what strikes me that day and what I have energy and concentration for. 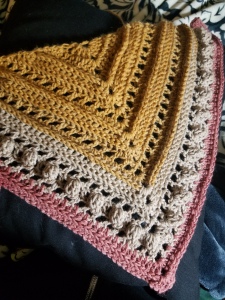 Also if you’re interested in what Lyme does and why it’s so controversial, NBC in NY did a 5 part series that is quick and easy to watch, the link is here.   Each part is under 5 mins.  Hope everyone is having a good Saturday!

Hey, thanks for stopping by. This blog is about dealing with Lyme and creating through crochet.